If you follow me on social media you will no doubt be aware that last month I went on a little city break to Madrid. I ADORE city breaks and I love Spain just as much so I honestly couldn’t wait to jump on a plane and get over there. My little sister had visited last year, so she gave me plenty of recommendations and of course as soon as we booked, I was allllllll over Instagram, Pinterest and the rest to find the best things to do and see.

I wouldn’t say it was my favourite city break as Dublin, Barcelona and Amsterdam are up there in my European favourites but we still had SUCH a good time and I know we will visit again at some point.

As my travel diaries are usually quite popular I thought I would share what we got up to and maybe give you guys some inspiration for any future travel plans you might have.

So i’ve wanted to book an AirBnB for a while now but have never gotten round to it and always ended up booking into a hotel instead. After booking our flights for Madrid, I had a lot of recommendations to stay in La Latina which is a very well known neighbourhood in the city centre so thought this would be the perfect time to go full on authentic and stay in a little Spanish home rather than a hotel.

I honestly cannot recommend La Latina enough as a base for your city break in Madrid. The area is absolutely stunning, with tall, colourful buildings, pretty little cobbled streets and squares lined with local bars and tapas restaurants you will never be short of anything to do or see.

La Latina is a 10 minute stroll from Mercado de San Miguel and Plaza Mayor and a short metro ride to the shopping streets of Gran Via. It’s so full of culture and traditional little eateries we had the best experience staying in the centre of it all. Although a lot of the bigger hotels are situated together in a different area close to Gran Via, I don’t think we would have ventured so far into La Latina if we had chosen not to stay there.

We booked a lovely little Air bnb which had a bedroom, living area with double sofa bed, kitchenette and bathroom in the perfect location on Calle De Toledo right opposite where the El Rastro market is situated on the weekends. It was set up beautifully and was perfectly clean, basically had everything we need however we have realised we are probably more hotel people as we like the little luxuries, a huge king bed and towel changes every day make things that bit extra special.

That said, we would probably book an Air bnb again for short city breaks as the experience it gave us, was priceless. If you are thinking of booking a stay in Madrid, i’ll link where we stayed here.

HOW WE GOT AROUND…

As I said, we LOVE to try and act like locals when we go on city breaks and the same goes for how we choose to travel and get around each city that we are in. So true to style, as soon as we hopped off the plane in Madrid we headed to the Metro Station, which is situated at Terminal 4 on the airport grounds. It was around 50 minutes and 3 or 4 different train rides to get to Puerto De Toledo (the nearest station to our apartment) and after the trip I vowed not to use it again. I was clearly tired from the 2am wake up call and fed up of dragging my case around, as it actually wasn’t that bad and we used it every day we were away. It sounds obvious, but everything on the ticket machine was in Spanish so we had to guess at buying a multi trip ticket which was probably the hardest part and the rest was pretty simple – just like the London Tube system.

We used an app called City Mapper (I mentioned this on my New York post here) which is a life saver and makes it a thousand times simpler than reading the wall maps.

As well as the Metro, we did our fair share of walking and I ended up with actual shin splints, definitely chose the wrong footwear but style over comfort and all that! We were averaging on 8-9 miles walking per day, plus a few Metro rides and  a couple of Ubers – i told you we like to get around. Madrid is a big old city so prepare yourself for this if you want to make the most of your few days there.

Ok, so where I want to eat is probably the first thing I plan when booking a trip anywhere. I like to know that there are good food options around the places I plan to see and that I won’t be left hungry at any point.

Breakfast is probably my favourite meal of the day but weirdly enough, it’s not something we really planned much as I just assumed there would be plenty of choice – sadly not. I don’t know if it’s just where we chose but we really struggled to find restaurants and cafe’s that opened before lunch! If you watch my vlog below, you’ll see we planned on getting the brunch platter at Habanera one day, only to arrive and find out it only opens for brunch on weekends and ended up with the COMPLETE opposite.
After that mini disaster, we opted for croissants and coffee in the Air bnb the following day – which I would probably recommend as it’s the best way to get an early start sight seeing and shopping!

In terms of lunch and dinner, there are plenty of options to choose from. You can head up to Plaza De Santa Ana which is where a lot of the bigger hotels are situated. It’s one of Madrid’s most popular squares and it’s easy to see why as there is plenty of restaurants, nightlife and culture in this little hub of the city. One thing we did find, was that people here seemed to be a little less friendly and the prices higher but we still enjoyed our dinner there none the less.

Our favourite place to go in the evenings was Calle Cava De San Miguel, which is a gorgeous cobbled street full to the brim of tiny tapas bars, owned by locals who are the friendliest, most welcoming people we met in the city. We ate here two nights, at two different tapas bars, both of which I would eat at again. At the top of the road, is Mercado De San Miguel – a HUGE indoor food market where you walk round eating and drinking while browsing your next food choice. There’s such a buzz inside the market, it’s definitely an experience I would recommend.

There’s one specific restaurant I would recommend and that’s Habanera. We visited here for lunch one day (following the disaster brunch fail) and were absolutely amazed. It’s a cuban inspired restaurant and the cuban theme has transpired through both the food and decor in the most stunning way – there are even swings in the toilets #instagramgoals. We ordered cocktails and food, and ordered again and again after each course because we couldn’t get enough. The shrimp tacos and cuban rice are a must-have. I would also recommend booking in advance as it gets extra busy.

Retiro Park has got to be my favourite place that we visited in Madrid. We spent a few hours there, but could have easily spent the entire day from morning until night wandering round discovering all the different gardens.

In the centre of the park is a huge artificial lake where you can hire a rowing boat for something like 3 euros, as well as the crystal palace and various monuments hidden amongst the trees.

It’s the best place to find some tranquility in the middle of the crazy city. 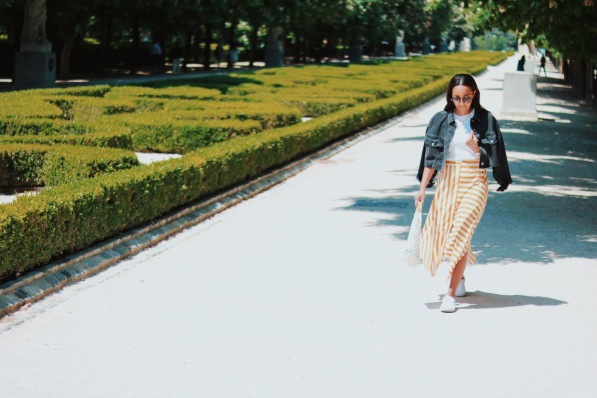 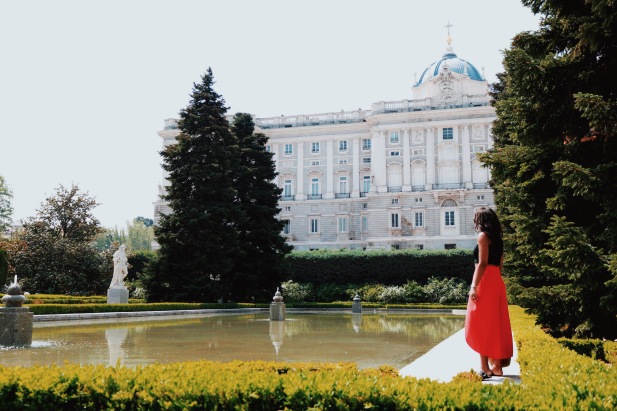 The Royal Palace of Madrid is another must see as well as the Sabatini Gardens which are also part of the palace. They’re filled with mazes and water features and have the most perfect view of the palace which is one of the most beautiful buildings i’ve seen. It’s a lovely place to enjoy an ice cream, take in the scenery and listen to the music being played by one of the cities many talented buskers.

About 10 minutes from The Royal Palace is the Debod Temple which is an ancient temple, that was originally built in southern Egypt in 200BC but then moved and re-built in the centre of Madrid in the early 1970’s. It’s in the centre of a park on a small hill, which seems a little random when you arrive, however, it’s again amazing to see and definitely worth a view – I’ve never been to Egypt so I took that as my chance to see some of the architecture and feel like I know just that little bit more of what it’s all about.

Other than seeing all of the historical parts of Madrid, we also spent an afternoon on Gran Via for some shopping and cocktails, took a stroll around the streets of La Latina to see all the graffiti walls and visited The Plaza Mayor one evening after dinner. 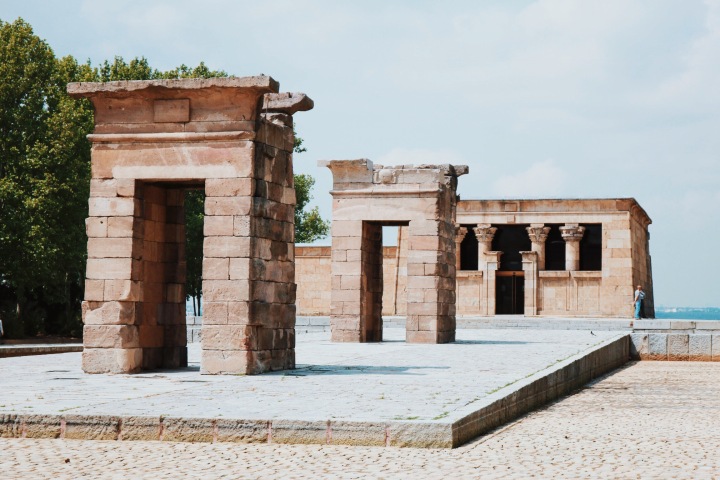 Rooftop bars are most definitely my favourite way to view Madrid from above. We made it our mission to find as many as we could and amongst all of the other sight seeing we did, we managed to visit the following;

Each of the bars has a very different vibe so El Viajero is very casual and a favourite spot for the locals, it’s filled with plants and greenery where as Circulo de Bella Artes is the perfect nighttime spot with mood lighting and an amazing cocktail menu plus a stunning view across Gran Via and the rest of the city.

I can’t think of a better way to drink in Madrid so I would highly recommend finding a few rooftop bars if you can.

I hope this has given you some tips on what to do in Madrid. It has turned into a much longer post than expected, so if you’ve managed to get this far – thank you! Rather than rattling on any longer, i’ll pop my Madrid Vlog below so take a look and don’t forget to subscribe to my Youtube channel while you’re over there! x